Get fresh music recommendations delivered to your inbox every Friday.
We've updated our Terms of Use. You can review the changes here.

It's Hot As Balls Outside

by Cirque du So What? 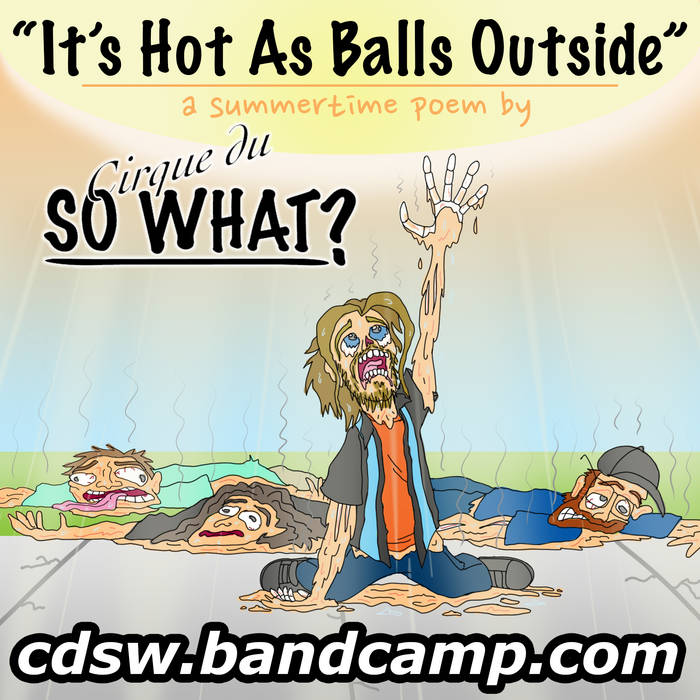 It's been 6 years since Cirque du So What?, the sketch comedy foursome comprised of FuMP mainstays Devo Spice, ShoEboX of Worm Quartet, Chris Mezzolesta of Power Salad, and the great Luke Ski, has posted a new sketch comedy track here at the FuMP. Well, in this age when the majority of people in this country share an opinion that is completely and fundamentally wrong, it's time for us to band together and create art that stands for what's right. Hopefully this piece will open the minds and hearts of the people and help them see the error of their opinions on the matter discussed within.

Any similarity between this piece and a certain poem by Rob Magnuson is purely intentional.

It's Hot As Balls Outside
by Cirque du So What?
A parody of the poem "It's Time For Winter To End" by Rob Magnuson

It's hot as balls outside.
A summer poem by Cirque du So What.

Most TV shows have gone bye-bye,
And allergens let loose and fly
While mosquitoes suck your arteries dry.
It's hot as balls outside.

While scores of drunkards crowd the scene
in line at music festival's latrine,
I'm home making my costume for Halloween.
It's hot as balls outside.

The summer's not the only heat,
Apparent by dogs who tend to greet
By plowing his boner into your feet.
[Dog: *dog humping a leg noises*]
[ShoEboX: GAAAAH!]
[SFX: *breaking glass*]
[Dog: *dog yelps while flying out window*]
[ShoEboX: My shin is not your bitch, you Alpo-slurping pervert!]
It's hot as balls outside.

In summer, you don't need a coat,
But I'd trade that for the swampy moat
Encompassing my taint and scrote.
It's hot as balls outside.

In the blistering heat, the plants won't grow.
All dried and brown, filling me with woe.
But you know what's actually pretty? SNOW!!!
It's hot as balls outside.

If you like summer, enjoy your bliss.
I'll just stand here sweating till I smell like piss
And think up more bullshit poems like this.
It's hot... as balls... outside.

released June 26, 2018
Written by Luke Ski, performed by all 4 of us, music and editing/mastering by Chris Mezzolesta.

Comedy musicians ShoEboX of Worm Quartet, Devo Spice, Chris Mezzolesta of Power Salad, and the great Luke Ski have spent the past decade and a half topping the charts on "The Dr. Demento Show" and posting songs at the Funny Music Project (TheFuMP.com). "Cirque du So What?" is what happened when they teamed up to start recording sketch comedy albums. They've put out 3 albums, with more on the way. ... more

Cirque du So What? recommends:

Bandcamp Daily  your guide to the world of Bandcamp